If OPD Scan III wavefront data of patient groups has been exported using the 'Advance' software of the OPD Scan Viewer, Datagraph can import this data set and create new patients and treatments out of this export file. It is recommended to start with a new, empty data file and add other patient data later.

Since the content and format of the Batch Export file from the OPD Scan can be decided during the batch export process, the data import procedure can be different and what is described here is only an example. It is important to label each OPD exam before the export, using the 'comment' field. (alternatively this can be done manually after the export, but before the automated Datagraph import). Follow up labeling should follow a logical sequence such as 'pre OP; 1m, 3m, 6m, 1y...) and specified under 'Define month labels' during the import process.

Since the OPD Scan exports data into a CSV file type, it is important to change your PC's regional settings to US-English, at least for the duration of data import and manipulation of the Excel table.

Open the CSV file after the export from OPD Advance Software with MS Excel and then save it as xlsx file. Check the content of the excel sheet and identify the following mandatory columns: PatID, Eye, Comment (containing follow up month labels), OPD/CT/INTzone columns followed by columns with zernike coefficients. If these columns are missing, re-export your OPD data using Advance software batch export function with different settings. Note that maximum 255 columns can be handled.

To start the import process select 'Nidek OPD Scan Batch' from the icon bar of the main menu.

Then the xlsx file to be imported must be selected and the correct month labeling verified before clicking the 'Start Import' button. 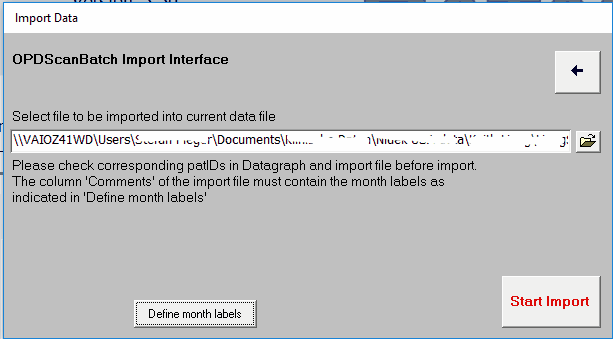 Before the import, Default settings such as Laser Type, Surgeons name etc. should be made within Datagraph.